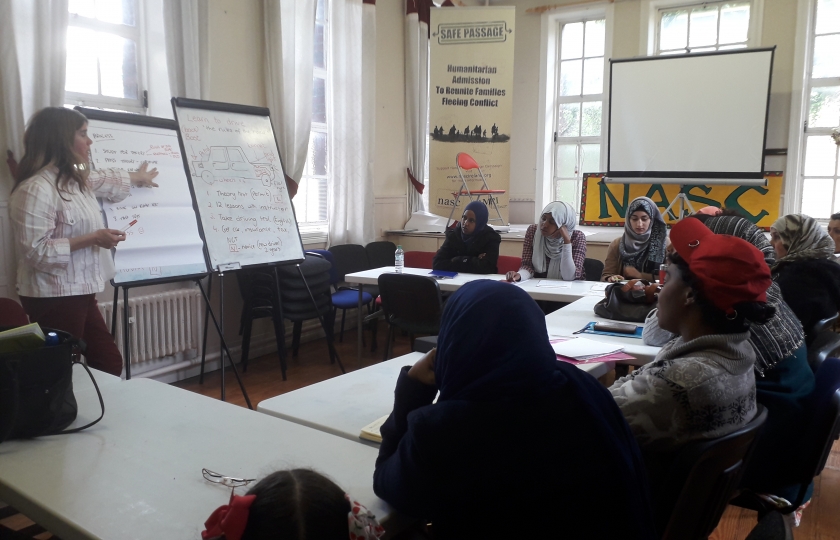 Between 2011 and 2013, Nasc was the lead partner in an exciting and innovative integration project for Cork City. ‘The Cork Integration Project: Integration through learning, the arts and Muslim Christian Dialogue' was co-financed by the European Commission under the European Integration Fund and was supported by the Office for the Promotion of Migrant Integration, Department of Justice and Equality.

It was comprised of three constituent projects with Nasc as the lead project. The other groups involved were: Mayfield Community Arts, Cork Midsummer Festival and Cois Tine.

The project aimed to break down the barriers to integration, encourage positive intercultural interactions and empower migrant women to engage with the wider community in a proactive way.

The project was successfully completed in February 2013.

Nasc provided a free course for legally resident migrant women from countries as diverse as Macao, Malaysia, China and the Democratic Republic of Congo. The course focused on improving English language acquisition but participants also learned practical skills for living in Ireland, including an introduction to the education and political systems in Ireland, registering to vote and tools to engage with their communities.

Participants also worked on interview and CV skills and the women even began investigating how to set up their own businesses and cooperatives. During the summer participants developed their business ideas and met with local enterprise board amongst others in the autumn.

Integration through the Arts:

As part of this multi group approach to integration, participants in Creative Connections were supported by Mayfield Community Arts and Cork Midsummer Festival. They completed a 2-year HETAC accredited course in arts, crafts and community arts facilitation. This group facilitated a range of arts based intercultural workshops including public workshops for women and children in the Old Fas Building, The Lord Mayor’s Pavilion and open workshops during Culture Night.

The participants also staged two interactive events as part of Cork Midsummer Festival in 2011 and 2012. Home is Where the Art Is in 2011 explored global traditions of hospitality and created a temporary home where people were welcomed and invited to create art. The participants staged an interactive event as part of Cork Midsummer Festival, 2012.

Hungry Tea in 2012 was a site-specific performance work focusing on stories, secrets, beauty, laughter and desolate places. The 16 participants in the project, from countries including the Democratic Republic of Congo, South Africa, Burma, Australia, Moldova and Ireland worked with award-winning British artist Mark Storor to create this year’s unique event.

Hungry Tea was reviewed enthusiastically in the Irish Times and the Irish Theatre magazine,

“One appears to capture the spirit of this captivating show"

“How lovely to go to something that asks more questions than it answers. Those questions will linger, long after one has closed the door and said goodbye”

Creative Connections has been invited to take this show to both New York and Berlin, we are currently seeking funding and this group hopes to continue working collectively after the life time of the Integration Project. As the group are brought together by a belief that participatory and collaborative arts engages both the artist and the audience, encouraging the exploration of human experience and potentialities and ultimately conveying complex messages which are often difficult to put into words. This has been identified important by the Third country participants as migrants often lack the opportunity to communicate their voice and experience due to language barriers and societal exclusion and art can challenge negative messaging and stereotypes, creating a dialogue which intersects politics, arts and community.

Cois Tine ran a series of inter religious dialogue workshops aiming to increase awareness, understanding and community integration between members of Christian and Islamic faith communities. These took place in Cork, Limerick, Dublin and Waterford. It was aimed at members of the public and those identified as having significant impact on integration including representatives from schools, colleges, hospitals and local business. There was a very positive response to these events and they were well attended by members of both faith communities.

Speakers included Islamic scholars, such as Sheikh Dr Umar al Qadri (a member of the Council of Imams and founder of the Al-Mustapha Islamic Education and Cultural Centre) and Christian theorists like Chris Hewer. The project published a resource in Winter 2012 looking at the Muslim and Christians faiths, how both faith communities approach to inter religious dialogue and how members of each communities can work together to increase tolerance and understanding and show the benefits of harmonious diversity in Cork City.

Our Lives Our Futures

Nasc providing women with a Gateway to fulfil their potential