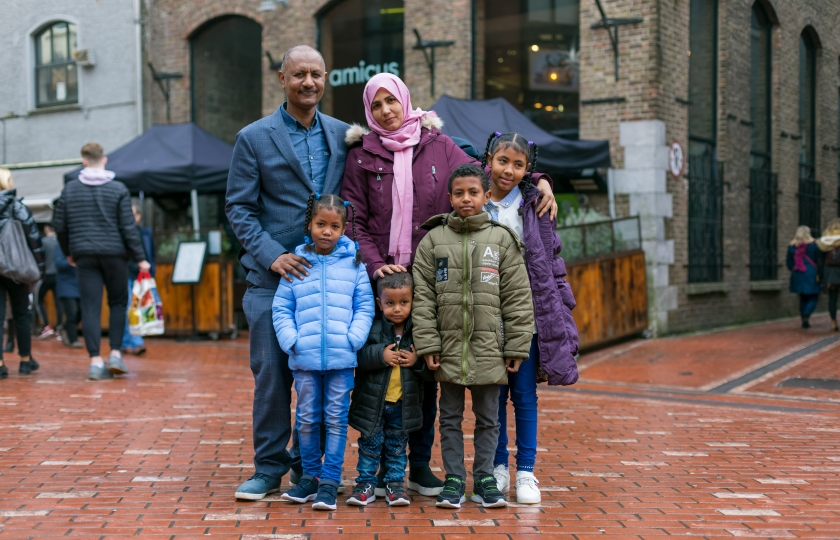 Refugees living in Ireland who were forced to leave their family members behind experience depression and anxiety, often not knowing where their loved ones are or if they are safe, said the Irish Refugee Council, Nasc and Oxfam Ireland in a report launched today.

The report – “A family belongs together” – highlights how being separated from family impedes integration into Irish society, with refugees unable to concentrate on things like improving their language skills, education or securing employment while worrying about the safety and whereabouts of their spouse, children, parents, siblings or other dependents.

One woman, forced to flee or face death, had to leave her children in the care of her best friend because she didn’t have enough money to take them with her. Upon arriving in Ireland without her family, she continued to suffer with depression and high blood pressure.

The Irish Refugee Council, Nasc and Oxfam Ireland are calling on the Irish Government to amend the International Protection Act 2015 to expand the definition of family to include adults who are dependent on the family unit prior to flight, including, parents, siblings, in-laws and any other dependent relative.

They are joined by the Civil Engagement Group of Senators who, in July 2017, introduced The International Protection (Family Reunification) (Amendment) Bill 2017 to the Seanad. The Bill received cross-party support, despite opposition from the government and will go through the Fourth and Fifth Stages in the Seanad today. If it progresses, it presents a real opportunity to change the legislation in support of refugee families.

Jim Clarken, Oxfam Ireland Chief Executive, said: “These harrowing stories of people escaping unimaginable suffering only to be met with more upon reaching a safety that separates them from the people that matter most, underpins what we already know – it’s time to right the wrong of the International Protection Act 2015 and keep families forced to flee together. We couldn’t rebuild our lives and learn to call a foreign country home without our partner, parents, children and those that depend on us by our sides – and neither can they.”

Fiona Finn, CEO of Nasc, said: “We know from years of experience working with refugees, the anxiety, fear and guilt that can overwhelm them knowing they are safe while their loved ones are still in danger. We also know the joy and sense of wholeness families feel when they are reunited - life can begin again. The current family reunification provisions in the International Protection Act force people to make impossible, unimaginable choices between some family members and others. We can fix this by restoring the family reunification laws that have served both us and our refugee communities well for almost two decades.”

Nick Henderson, CEO of the Irish Refugee Council said: “Family reunification is a critically important piece of providing refuge to people. We have seen the peace that comes when people who depend on each other are reunited in safety. This is often the only way refugees can truly integrate and begin to think about learning a new language, going to a new school or getting a job. We must ensure our family reunification laws make this a reality for all refugee families in Ireland.”

Notes to the Editor: