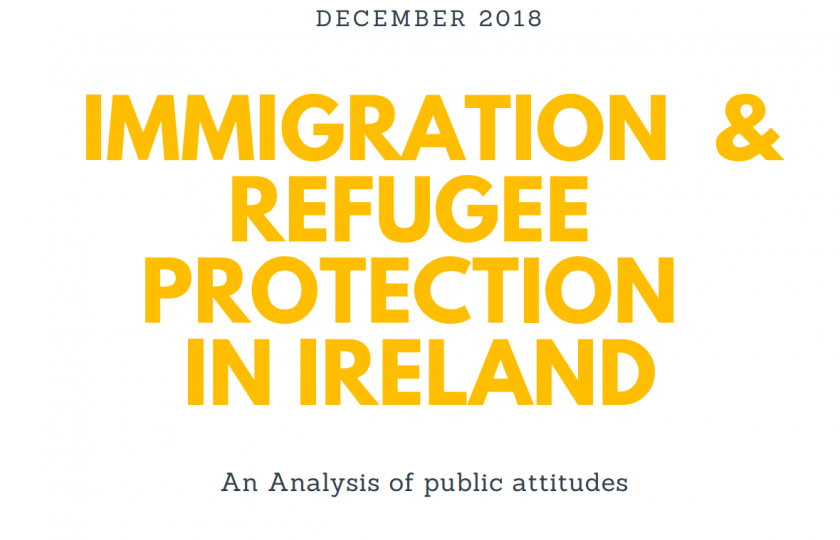 Yesterday Minister of State for Equality, Integration and Immigration David Stanton T.D., launched a new report by Social Change Initiative Immigration and Refugee Protection in Ireland in the AV Room.

The report has been produced by the Social Change Initiative based on nationally representative polling and is being supported by migrant organisations including the Immigrant Council of Ireland, the Irish Refugee Council, Doras Luimní, Children’s Rights Alliance and Nasc, the Migrant and Refugee Rights Centre.

The report is one of a suite of reports that were undertaken in France, Germany, Italy and Greece by More in Common, in partnership with the Social Change Initiative. This research forms part of a larger initiative to support effective communications for individual activists and organisations with an interest in immigration and refugee protection issues.  But it will also be of interest to those who are committed to address the current threats to open and inclusive societies.

The data on public attitudes reveals a feeling of solidarity with migrants, particularly with refugees seeking protection, is evident from the polling, with a majority of people agreeing Ireland should offer protection to people fleeing persecution. Many people also believe that increasing diversity as a result of migration has increased opportunities for everyone in Ireland. The survey also identifies areas of concern, in particular in relation to public concerns about the impact of migration. These concerns indicate the need for efforts to be put into public awareness raising campaigns alongside implementation of a strong proactive integration strategy, to ensure that negative attitudes towards migrants and refuges living in Ireland, based on mistruths and a lack of information, do not perpetuate.

Immigration and Refugee Protection in Ireland headline findings include:

The joint statement issued on the launch of the report is available here.